A charity inspired by Michael Long’s historic walk to Canberra, the Long Walk aims to get the lives of Indigenous people back on the national agenda.

The Long Walk 2016 event will be held on Saturday 28 May at Federation Square in Melbourne, following the theme We Walk Together. 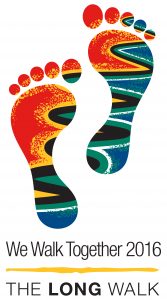 The community event will include a free concert from noon, as well as kid’s activities, craft workshops, stallholders, food and more!

Michael Long will rally the walkers for The Long Walk to Dreamtime at the ‘G at the new time of 4.30pm, making the event more family friendly, with live music along the journey through Birrarung Marr to the MCG.

To find out how you can get involved on the day and support this important campaign visit the Long Walk website.

History of the Long Walk

Michael Long is one of the most recognisable Aboriginal figures in AFL football, winning two premierships with the Essendon Football Club during a playing career that spanned from 1989 to 2001.

In 1995, Michael famously made a stand against racial abuse, following an on-field incident with another player, asserting that racism had no place in sport. Ultimately this lead to Michael being one of the pioneering forces behind the racial abuse code that was adopted by the AFL in the 1990s.

The Long Walk to Canberra

On 21 November 2004 Michael Long embarked an historic trek, walking from his home in the suburbs of Melbourne all the way to Parliament House in Canberra – more than 650 kilometres away.

After returning home from yet another Aboriginal funeral, Michael decided that something needed to be done about the plight of his people. He took it upon himself to get Aboriginal and Torres Strait Islander issues back on the national agenda and resolved to meet with Prime Minister John Howard to discuss his concerns…even if he had to walk all the way to Canberra to do it.

Michael was joined on the road by Aboriginal and non-Aboriginal supporters from all over Australia. Some walked in support for an hour, some for a day and some took the journey all the way to Canberra. As the walkers passed through the Victorian countryside, local people came out to meet them, offering encouragement, support and assistance.

The Long Walk website was flooded with thousands of emails from Indigenous and non-Indigenous Australians expressing their support. A common theme emerged – The Long Walk provided a much-needed public vehicle allowing Australians to express their commitment to reconciliation and a united Australia.

When he heard about this amazing journey, the Prime Minister agreed to meet Michael when he arrived in Canberra. The Long Walk officially came to an end on Thursday, 2 December 2004 as the walkers arrived in Canberra. The final leg wound its way through the heart of the city and the weary walkers were joined by thousands of supporters as they made their way to the Prime Minister’s office.