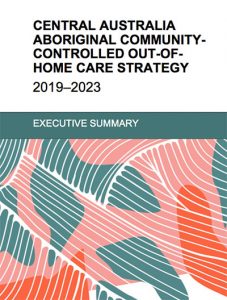 The outcomes of the extensive consultation highlight the need for a stronger voice for Aboriginal children, families and communities in child protection decision-making with a greater focus on early intervention so that Aboriginal children grow up safe and connected to family, community, culture and Country. It also indicates a need for genuine commitment for child and family services to be transferred to Aboriginal community-controlled organisations.

On 26 February 2019, the Central Australia Aboriginal Community-Controlled Out-of-home Care Steering Committee and SNAICC – National Voice for our Children brought together leaders from communities and service providers in Alice Springs at a forum to discuss next steps in implementation of the Strategy.

Guided by a shared goal to ensure that Aboriginal children and young people are safe and have the opportunity to thrive, the outcomes from the forum demonstrate shared support among participant organisations for the Strategy, with a strong and united call from community-controlled organisations in Central Australia for the Northern Territory Government to respond and detail how it will support and resource the Strategy’s implementation.

Based on the outcomes of the forum and the priorities that were identified by participants, the Steering Committee requests the following: